Trust in Medical Scientists Has Grown in U.S. 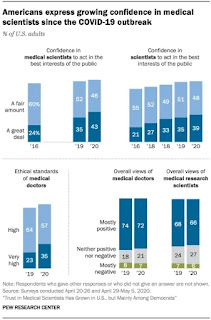 Americans’ confidence in medical scientists has grown since the coronavirus outbreak first began to upend life in the United States, as have perceptions that medical doctors hold very high ethical standards. And in their own estimation, most U.S. adults think the outbreak raises the importance of scientific developments.

Scientists have played a prominent role in advising government leaders and informing the public about the course of the pandemic, with doctors such as Anthony Fauci and Deborah Birx, among others, appearing at press conferences alongside President Donald Trump and other government officials.

But there are growing partisan divisions over the risk the novel coronavirus poses to public health, as well as public confidence in the scientific and medical community and the role such experts are playing in public policy.

Public confidence in medical scientists to act in the best interests of the public has gone up from 35% with a great deal of confidence before the outbreak to 43% in the Center’s April survey. Similarly, there is a modest uptick in public confidence in scientists, from 35% in 2019 to 39% today. (A random half of survey respondents rated their confidence in one of the two groups.)