When Is “Gay Panic” Accepted? Exploring Juror Characteristics and Case Type as Predictors of a Successful Gay Panic Defense 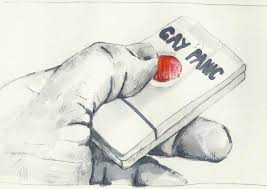 “Gay panic” refers to a situation in which a heterosexual individual charged with a violent crime against a homosexual individual claims they lost control and reacted violently because of an unwanted sexual advance that was made upon them. This justification for a violent crime presented by the defendant in the form of a provocation defense is used as an effort to mitigate the charges brought against him. There has been relatively little research conducted concerning this defense strategy and the variables that might predict when the defense is likely to be successful in achieving a lesser sentence for the defendant. This study utilized 249 mock jurors to assess the effects of case type (assault or homicide) and juror characteristics (homophobia, religious fundamentalism, and political orientation) on the success of the gay panic defense compared with a neutral provocation defense. Participant homophobia was found to be the driving force behind their willingness to accept the gay panic defense as legitimate. Higher levels of homophobia and religious fundamentalism were found to predict more leniency in verdict decisions when the gay panic defense was presented. This study furthers the understanding of decision making in cases involving the gay panic defense and highlights the need for more research to be conducted to help understand and combat LGBT (lesbian, gay, bisexual, and transgender) prejudice in the courtroom.