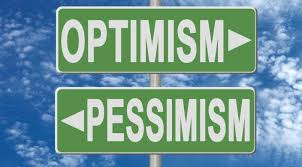 Future optimism is a widespread phenomenon, often attributed to the psychology of intuition. However, causal evidence for this explanation is lacking, and sometimes cautious realism is found. One resolution is that thoughts about the future have two steps: A first step imagining the desired outcome, and then a sobering reflection on how to get there. Four pre-registered experiments supported this two-step model, showing that fast predictions are more optimistic than slow predictions. The total sample consisted of 2,116 participants from USA and Norway, providing 9,036 predictions. In Study 1, participants in the fast-response condition thought positive events were more likely to happen and that negative events were less likely, as compared to participants in the slow-response condition. Although the predictions were optimistically biased in both conditions, future optimism was significantly stronger among fast responders. Participants in the fast-response condition also relied more on intuitive heuristics (CRT). Studies 2 and 3 focused on future health problems (e.g., getting a heart attack or diabetes), in which participants in the fast-response condition thought they were at lower risk. Study 4 provided a direct replication, with the additional finding that fast predictions were more optimistic only for the self (vs. the average person). The results suggest that when people think about their personal future, the first response is optimistic, which only later may be followed by a second step of reflective realism. Current health, income, trait optimism, perceived control and happiness were negatively correlated with health-risk predictions, but did not moderate the fast-optimism effect.

From the Discussion section:

Four studies found that people made more optimistic predictions when they relied on fast intuition rather than slow reflection. Apparently, a delay of 15 seconds is sufficient to enable second thoughts and a drop in future optimism. The slower responses were still "unrealistically optimistic"(Weinstein, 1980; Shepperd et al., 2013), but to a much lesser extent than the fast responses. We found this fast-optimism effect on relative comparison to the average person and isolated judgments of one's own likelihood, in two different languages across two different countries, and in one direct replication.All four experiments were pre-registered, and the total sample consisted of about 2,000 participants making more than 9,000 predictions.