Physician Burnout Is Widespread, Especially Among Those in Midcareer 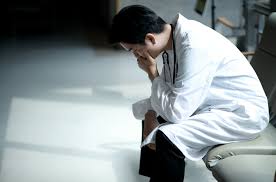 Burnout is particularly pervasive among health-care workers, such as physicians or nurses, researchers say. Risk for burnout among physicians is significantly greater than that of general U.S. working adults, and physicians also report being less satisfied with their work-life balance, according to a 2019 study published in Mayo Clinic Proceedings.

Overall, 42% of the physicians in the new survey, across 29 specialties, reported feeling some sense of burnout, down slightly from 46% in 2015.

The report, published on Wednesday by medical-information platform Medscape, breaks down the generational differences in burnout and how doctors cope with the symptoms that are widespread throughout the profession.

“There are a lot more similarities than differences, and what that highlights is that burnout in medicine right now is really an entire-profession problem,” said Colin West, a professor of medicine at the Mayo Clinic who researches physician well-being. “There’s really no age group, career stage, gender or specialty that’s immune from these issues.”

In recent years, hospitals, health systems and advocacy groups have tried to curb the problem by starting wellness programs, hiring chief wellness officers or attempting to reduce administrative tasks for nurses and physicians.

Still, high rates of burnout persist among the medical community, from medical-school students to seasoned professionals, and more than two-thirds of all physicians surveyed in the Medscape report said that burnout had an impact on their personal relationships.

Nearly one in five physicians also reported that they are depressed, with the highest rate, 18%, reported by Gen Xers.