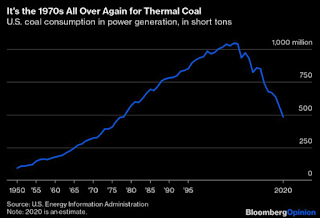 In the U.S., the move away from coal was well underway before the $7 trillion asset manager announced its restrictions. Companies have been shutting down coal-fired power plants and setting “transformative responsible energy plans” removing coal from the mix completely, even in the absence of robust federal policies.

That decline is thanks to a massive number of plant retirements, now totaling more than 300 since 2010. The U.S. coal fleet has not had any net capacity additions since 2011. 2015 is the most significant year for coal retirements to date, as a suite of Obama-era air quality standards took effect. 2018 wasn’t far behind, however, and 2019 wasn’t far behind 2018.

The base effect of a smaller number of operational coal plants also means that consumption is declining at an accelerating rate. Using the EIA’s projection for 2020 coal burn in the power sector, year-on-year consumption will decline nearly 15%, the most since at least 1950.

Coal’s decline doesn’t exist in isolation. Most coal in the U.S. travels from mine to plant by rail, so there’s a predictable impact on rail cargoes. A decade ago, U.S. rail carriers shipped nearly 7 million carloads of coal. Last year, that figure was barely 4 million.