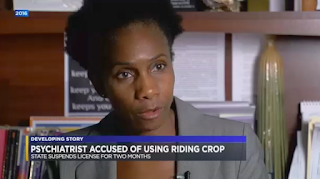 A Memphis-area psychiatrist whose license was suspended last year for using a riding crop on patients could now lose her license again due to an ongoing dispute with state health licensing officials.

Dr. Valerie Augustus, who runs Christian Psychiatric Services in the suburb of Germantown, was forced to close her clinic last June after a medical discipline trial proved to the Tennessee Board of Medical Examiners that she had used a riding crop or a whip on at least 10 patients. The clinic was permitted to re-open six months later after Augustus agreed to professional probation, but she continued to fight the case in court.

Augustus, 57, ran her clinic for 17 years without any discipline issues before her license was suspended last year. A board order states that, in addition to using the whip and riding crop on patients, Augustus kept the items “displayed in her office” and “compared her patients to mules.”

The government’s attorney, Paetria Morgan, argued at the medical discipline trial that Augustus hit her patients if they did not lose weight or exercise. In addition to the whip and riding crop, Morgan alleged Augustus hit patients with a “four-foot stick of bamboo.”