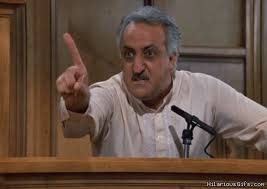 Public discourse is often caustic and conflict-filled. This trend seems to be particularly evident when the content of such discourse is around moral issues (broadly defined) and when the discourse occurs on social media. Several explanatory mechanisms for such conflict have been explored in recent psychological and social-science literatures. The present work sought to examine a potentially novel explanatory mechanism defined in philosophical literature: Moral Grandstanding. According to philosophical accounts, Moral Grandstanding is the use of moral talk to seek social status. For the present work, we conducted six studies, using two undergraduate samples (Study 1, N = 361; Study 2, N = 356); a sample matched to U.S. norms for age, gender, race, income, Census region (Study 3, N = 1,063); a YouGov sample matched to U.S. demographic norms (Study 4, N = 2,000); and a brief, one-month longitudinal study of Mechanical Turk workers in the U.S. (Study 5, Baseline N = 499, follow-up n = 296), and a large, one-week YouGov sample matched to U.S. demographic norms (Baseline N = 2,519, follow-up n = 1,776). Across studies, we found initial support for the validity of Moral Grandstanding as a construct. Specifically, moral grandstanding motivation was associated with status-seeking personality traits, as well as greater political and moral conflict in daily life.

Public discourse regarding morally charged topics is prone to conflict and polarization, particularly on social media platforms that tend to facilitate ideological echo chambers. The present study introduces an interdisciplinary construct called Moral Grandstanding as possible a contributing factor to this phenomenon. MG links various domains of psychology with moral philosophy to describe the use of public moral speech to enhance one’s status or image in the eyes of others. Within the present work, we focused on the motivation to engage in MG. Specifically, MG Motivation is framed as an expression of status-seeking drives in the domain of public discourse. Self-reported motivations underlying grandstanding behaviors seem to be consistent with the construct of status-seeking more broadly, seeming to represent prestige and dominance striving, both of which were found to be associated with greater interpersonal conflict and polarization. These results were consistently replicated in samples of U.S. undergraduates and nationally representative cross-sectional of U.S. residents, and longitudinal studies of adults in the U.S. Collectively, these results suggest that MG Motivation is a useful psychological phenomenon that has potential to aid our understanding of the intraindividual mechanisms driving caustic public discourse.