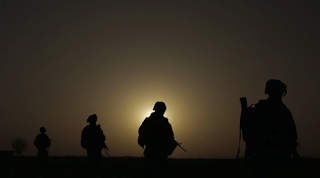 The president may think he’s supporting men and women in uniform. “When our soldiers have to fight for our country, I want to give them the confidence to fight,” he said in a statement issued by the White House. “We train our boys to be killing machines, then prosecute them when they kill!” he said on Twitter last month.

Whatever the reason, absolving people who commit war crimes does great harm to society in general, and the men and women who served honorably — as far more than “killing machines” — in the wars since the Sept. 11 terrorist attacks in particular.

A nation has to know that military action being taken in its name follows morally defensible rules — that soldiers do not, for instance, kill unarmed civilians or prisoners.

To excuse men who have so flagrantly violated those rules — to treat them as heroes, even — is to cast the idea of just war to the winds. It puts the nation and veterans at risk of moral injury, the shattering of a moral compass.

One of the loudest groups pushing for Mr. Trump’s pardons was United American Patriots, a nonprofit organization that supports numerous soldiers accused of crimes, including Mr. Lorance, Mr. Behenna and Major Golsteyn. Last month, Chief Gallagher sued two of his former lawyers and United American Patriots, alleging that his lawyers tried to delay the case to increase fund-raising for the organization.

Supporters of the pardoned men say the military justice system comes down too hard and too often on honorable soldiers fighting through the fog of war. That wouldn’t explain why United American Patriots has made a cause célèbre of Robert Bales, who pleaded guilty to slaughtering 16 Afghan civilians in their homes during a one-man nighttime rampage in 2012.