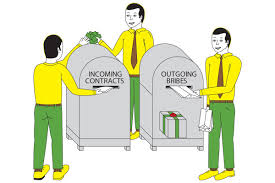 This is because social norms—the patterns of behavior that are accepted as normal—impact how people will behave in many situations, including those involving ethical dilemmas. In 1991 psychologists Robert B. Cialdini, Carl A. Kallgren and Raymond R. Reno drew the important distinction between descriptive norms—the perception of what most people do—and injunctive norms—the perception of what most people approve or disapprove of. We argue that both types of norms influence bribery.

Simply put, knowing that others are paying bribes to obtain preferential treatment (a descriptive norm) makes people feel that it is more acceptable to pay a bribe themselves.

In 2009 Ariely, with behavioral researchers Francesca Gino and Shahar Ayal, published a study showing how powerful social norms can be in shaping dishonest behavior. In two lab studies, they assessed the circumstances in which exposure to others' unethical behavior would change someone's ethical decision-making. Group membership turned out to have a significant effect: When individuals observed an in-group member behaving dishonestly (a student with a T-shirt suggesting he or she was from the same school cheating in a test), they, too, behaved dishonestly. In contrast, when the person behaving dishonestly was an out-group member (a student with a T-shirt from the rival school), observers acted more honestly.

But social norms also vary from culture to culture: What is acceptable in one culture might not be acceptable in another. For example, in some societies giving gifts to clients or public officials demonstrates respect for a business relationship, whereas in other cultures it is considered bribery. Similarly, gifts for individuals in business relationships can be regarded either as lubricants of business negotiations, in the words of behavioral economists Michel André Maréchal and Christian Thöni, or as questionable business practices. And these expectations and rules about what is accepted are learned and reinforced by observation of others in the same group. Thus, in countries where individuals regularly learn that others are paying bribes to obtain preferential treatment, they determine that paying bribes is socially acceptable. Over time the line between ethical and unethical behavior becomes blurry, and dishonesty becomes the “way of doing business.”