What a Pediatrician Saw Inside a Border Patrol Warehouse 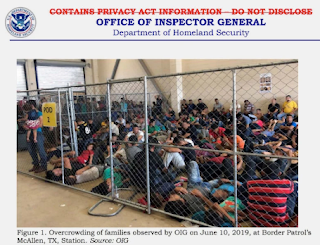 As agents brought in the children she requested, Sevier said, the smell of sweat and soiled clothing filled the room. They had not been allowed to bathe or change since crossing the Rio Grande and turning themselves over to officials. Sevier found that about two-thirds of the kids she examined had symptoms of respiratory infection. The guards wore surgical masks, but the detainees breathed the air unfiltered. As the children filed in, Sevier said she found evidence of sleep deprivation, dehydration, and malnutrition too.

During the exam, she noticed that the toddler behaved differently from the kids his age she sees every day. In an exam room at her clinic decorated with a Lion King mural, I watched her do a routine checkup on a slightly younger boy. This toddler pulled back when Sevier touched him, but was easily soothed by his mother. The reaction was normal—“a small oscillation between worried and okay,” Sevier explained. A little shyness is typical, she said, but toddlers “shouldn't be fearful of a stranger.” When they are afraid—when the memory of their last shots is fresh in their mind, for instance—they resist Sevier by crying, clinging to their caregiver, or squirming beneath her stethoscope.

At Ursula, however, the children Sevier examined—like the panting 2-year-old—were “totally fearful, but then entirely subdued,” she told me. She could read the fear in their faces, but they were perfectly submissive to her authority. “I can only explain it by trauma, because that is such an unusual behavior,” she said. Sevier had brought along Mickey Mouse toys to break the ice, and the kids seem to enjoy playing with them. Yet none resisted, she said, when she took them away at the end of the exam. “At some point,” Sevier mused, “you’re broken and you stop fighting.”