How the concept of forgiveness is used to gaslight women 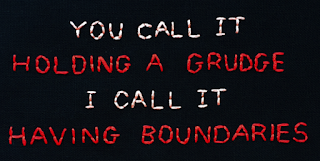 I’m not against the concept of forgiveness, I’ve chosen to forgive people countless times. However, what I’m definitely against, is pressuring people to forgive and shaming them if they don’t. I’ve found there’s a lot of stigma attached to those who choose not to forgive, especially if you’re a woman.

Women that don’t forgive, are assumed to be “scorned”, “bitter and twisted”. The stereotypes that surround “unforgiving” women, are used to gaslight them.

When women express that they’re upset or angry (and justifiably so), as a result of being hurt, people dismiss them as “bitter” and the validity of their feelings and experiences are questioned.

She isn’t psychologically traumatised because she’s been wronged, she’s just a “scorned woman”, “got an axe to grind”, “holding a grudge” and “unable to move on”. The fault lies with her, not the perpetrator because she won’t “let it go” and “get over it”. She’s not the victim, she’s bringing it on herself by not forgiving. The blame is shifted from the wrongdoer to the victim.