U.S. Suicide Rates Are the Highest They've Been Since World War II 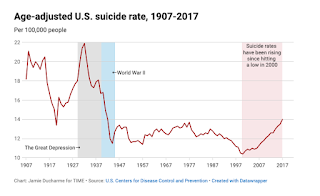 U.S. suicide rates are at their highest since World War II, according to federal data—and the opioid crisis, widespread social media use and high rates of stress may be among the myriad contributing factors.

In 2017, 14 out of every 100,000 Americans died by suicide, according to a new analysis released by the Centers for Disease Control and Prevention’s National Center for Health Statistics. That’s a 33% increase since 1999, and the highest age-adjusted suicide rate recorded in the U.S. since 1942. (Rates were even higher during the Great Depression, hitting a century peak of 21.9 in 1932.)

“I don’t think there’s a one-size-fits all reason” since there’s almost never a single cause of suicide, says Jill Harkavy-Friedman, vice president of research at the American Foundation for Suicide Prevention, a nonprofit that supports suicide prevention research, education and policy. “I don’t think there’s something you can pinpoint, but I do think a period of increased stress and a lack of a sense of security may be contributing.”

It’s even more difficult to assign causes to the uptick, Harkavy-Friedman says, because it’s happening across diverse demographic groups. Men have historically died by suicide more frequently than women, and that’s still true: As of 2017, the male suicide rate was more than three times higher than the female rate. But female suicide rates are rising more quickly—by 53% since 1999, compared to 26% for men—and the gap is narrowing. For both genders, suicide rates are highest among American Indians and Alaska natives, compared to other ethnicities, and when the data are broken down by age group, the most suicide deaths are reported among people ages 45 to 64—but nearly every ethnic and age group saw an increase of some size from 1999 to 2017.