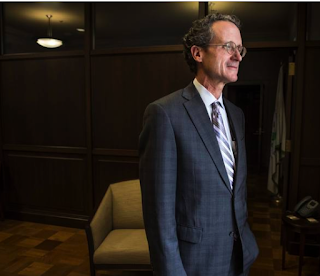 Less than one month after joining the EPA, Wehrum met with two former clients at his old firm without consulting in advance with ethics officials, even though they had cautioned him about such interactions. That same month, Wehrum participated in a decision that appeared to benefit a former client, DTE Energy, in which then-EPA Administrator Scott Pruitt issued a memo stating that the agency would not be “second guessing utilities” when they projected whether they would need a few federal permits after expanding their operations.

Wehrum, who heads the air and radiation office at the EPA, acknowledged both incidents in an interview with The Post but said he had determined that he did not violate federal ethics rules.

“I have, from day one, tried to be absolutely strict and assiduous as to what I do about complying with my ethical obligations,” Wehrum said, “because it doesn’t do me any good, and it doesn’t do the agency any good, to be doing things that people see as unethical.”

Still, the fallout from reporting on Wehrum’s ties to his former firm and the utility industry by The Post and other outlets — including Politico, the New York Times and E&E News — has continued to reverberate. The Utility Air Regulatory Group, a group of power companies that paid Hunton Andrews Kurth millions in membership dues, disbanded earlier this year.

Wehrum’s decision to leave is the second high-profile EPA resignation in the past year. Last July, Pruitt stepped down after facing probes by Congress, the EPA Office of Inspector General and the Office of Special Counsel for his management and spending practices.