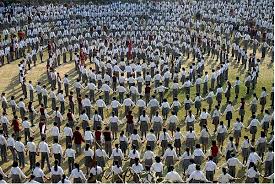 Understanding human cooperation is of major interest across the natural and social sciences. But it is unclear to what extent cooperation is actually a general concept. Most research on cooperation has implicitly assumed that a person’s behaviour in one cooperative context is related to their behaviour in other settings, and at later times. However, there is little empirical evidence in support of this assumption. Here, we provide such evidence by collecting thousands of game decisions from over 1,400 individuals. A person’s decisions in different cooperation games are correlated, as are those decisions and both self-report and real-effort measures of cooperation in non-game contexts. Equally strong correlations exist between cooperative decisions made an average of 124 days apart. Importantly, we find that cooperation is not correlated with norm-enforcing punishment or non-competitiveness. We conclude that there is a domain-general and temporally stable inclination towards paying costs to benefit others, which we dub the ‘cooperative phenotype’.

Here we have presented a range of evidence in support of a ‘cooperative phenotype’: cooperation in anonymous, one-shot economic games reflects an inclination to help others that has a substantial degree of domain generality and temporal stability. The desire to pay costs to benefit others, so central to theories of the evolution and maintenance of cooperation, is psychologically relevant and can be studied using economic games. Furthermore, our data suggest that norm-enforcing punishment and competition may not be part of this behavioral profile: the cooperative phenotype appears to be particular to cooperation.

Phenotypes are displayed characteristics, produced by the interaction of genes and environment. Though we have shown evidence of the existence (and boundaries) of the cooperative phenotype, our experiments do not illuminate whether cooperators are born or made (or something in between). Previous work has shown that cooperation varies substantially across cultures, and is influenced by previous experience, indicating an environmental contribution. On the other hand, a substantial heritable component of cooperative preferences has also been demonstrated, as well as substantial prosocial behaviour and preferences among babies and young children. The ‘phenotypic assay’ for cooperation offered by economic games provides a powerful tool for future researchers to illuminate this issue, teasing apart the building blocks of the cooperative phenotype.