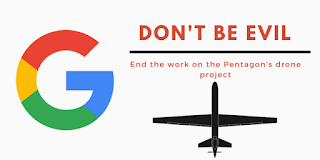 One of these programmes is Project Maven, which trains artificial intelligence systems to parse footage from surveillance drones in order to “extract objects from massive amounts of moving or still imagery,” writes Drew Cukor, chief of the Algorithmic Warfare Cross-Functional Team. The programme is a key element of the US army’s efforts to select targets. One of the companies working on Maven is Google. Engineers at Google have protested their company’s involvement; their peers at companies like Amazon and Microsoft have made similar complaints, calling on their employers not to support the development of the facial recognition tool Rekognition, for use by the military, police and immigration control. For technology companies, this raises a question: should they play a role in governments’ use of force?

The US government’s policy of using armed drones to hunt its enemies abroad has long been controversial. Gibson argues that the CIA and US military are using drones to strike “far from the hot battlefield, against communities that aren't involved in an armed conflict, based on intelligence that is quite frequently wrong”. Paul Scharre, director of the technology and national security programme at the Center for a New American Security and author of Army of None says that the use of drones and computing power is making the US military a much more effective and efficient force that kills far fewer civilians than in previous wars. “We actually need tech companies like Google helping the military to do many other things,” he says.