Why is suicide on the rise in the US – but falling in most of Europe? 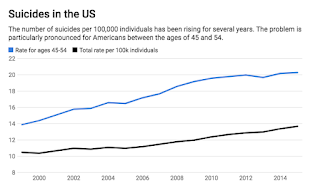 There is evidence that rising suicide rates are associated with a weakening of the social norms regarding mutual aid and support.

In one study on suicide in the U.S., the rising rates were closely linked with reductions in social welfare spending between 1960 and 1995. Social welfare expenditures include Medicaid, a medical assistance program for low income persons; Temporary Assistance for Needy Families, which replaced Aid to Families with Dependent Children; the Supplemental Security Income program for the blind, disabled and elderly; children’s services including adoption, foster care and day care; shelters; and funding of public hospitals for medical assistance other than Medicaid.

Later studies found a similar relationship between suicide and social welfare for the U.S. in the 1980s and between 1990 and 2000, as well as for nations in the Organization for Economic Cooperation and Economic Development.