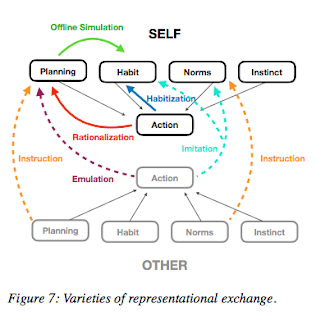 Rationalization occurs when a person has performed an action and then concoct the beliefs and desires that would have made it rational. Then, people often adjust their own beliefs and desires to match the concocted ones. While many studies demonstrate rationalization, and a few theories identify its underlying cognitive mechanisms, we have little understanding of its its function. Why is the mind designed to construct post hoc rationalizations of its behavior, and then to adopt them? This design may accomplish an important task: to transfer information between the many different processes and representations that influence our behavior. Human decision-making does not rely on a single process; it is influenced by reason, habit, instincts, cultural norms and so on. Several of the processes that influence our behavior are not organized according to rational choice (i.e., maximizing desires conditioned on belief). Thus, rationalization extracts implicit information—true beliefs and useful desires—from the influence of these non-rational systems on behavior. This is not a process of self-perception as traditionally conceived, in which one infers the hidden contents of unconscious reasons. Rather, it is a useful fiction. It is a fiction because it imputes reason to non-rational psychological processes; it is useful because it can improve subsequent reasoning. More generally, rationalization is one example of broader class of “representational exchange” mechanisms, which transfer of information between many different psychological processes that guide our behavior. This perspective reveals connections to theory of mind, inverse reinforcement learning, and reflective equilibrium.

Asking patients why they engaged in a behavior is another example of useful fiction.  Dr. Cushman suggests psychologists ask: What made that worth doing?