Is compassion fatigue inevitable in an age of 24-hour news? 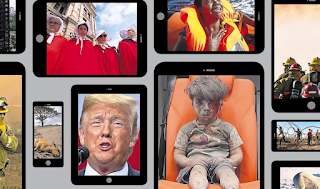 Not long after compassion fatigue emerged as a concept in healthcare, a similar concept began to appear in media studies – the idea that overexposure to horrific images, from news reports in particular, could cause viewers to shut down emotionally, rejecting information instead of responding to it. In her 1999 book  Compassion Fatigue: How the Media Sell Disease, Famine, War and Death, the journalist and scholar Susan Moeller explored this idea at length. “It seems as if the media careen from one trauma to another, in a breathless tour of poverty, disease and death,” she wrote. “The troubles blur. Crises become one crisis.” The volume of bad news drives the public to “collapse into a compassion fatigue stupor”.

Susan Sontag grappled with similar questions in her short book Regarding the Pain of Others, published in 2003. By “regarding” she meant not just “with regard to”, but looking at: “Flooded with images of the sort that once used to shock and arouse indignation, we are losing our capacity to react. Compassion, stretched to its limits, is going numb. So runs the familiar diagnosis.” She implies that the idea was already tired: media overload dulls our sensitivity to suffering. Whose fault is that – ours or the media’s? And what are we supposed to do about it?

By Moeller’s account, compassion fatigue is a vicious cycle. When war and famine are constant, they become boring – we’ve seen it all before. The only way to break through your audience’s boredom is to make each disaster feel worse than the last. When it comes to world news, the events must be “more dramatic and violent” to compete with more local stories, as a 1995 study of international media coverage by the Pew Research Center in Washington found.