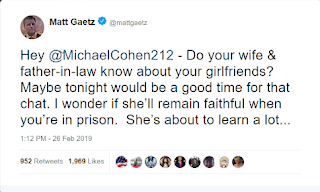 Richard Painter, the former chief ethics lawyer for the George W. Bush administration, called for the speedy arrest of Rep. Matt Gaetz (R-Fla.), accusing him of witness tampering hours after he issued what many perceived to be a threatening tweet directed at Michael Cohen on the eve of Cohen's public congressional testimony.

Gaetz drew sharp backlash on Tuesday after posting a tweet, which has since been deleted, that suggested Cohen had not been faithful to his wife and questioned whether his wife would remain faithful to him while he serves time in prison.

Gaetz later issued an apology for the tweet after a number of legal experts and Democrats suggested the post may constitute witness tampering.

Gaetz sought to clarify that it was not his “intent to threaten” Cohen in his earlier tweet and added that “he should have chosen words that better showed my intent.”

Editor's Note: I guess I should not be shocked that nearly one thousand people retweeted a threat at time of this screen capture.  There were more.  Tribalism.......