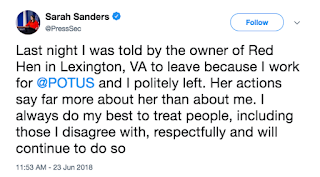 The former director of the Office of Government Ethics said on Saturday that White House press secretary Sarah Huckabee Sanders’s decision to tweet about being kicked out of a Virginia restaurant violated ethics laws.

Sanders was asked to leave the Red Hen restaurant in Lexington, Va., on Friday night, but confirmed the incident in a Saturday morning tweet.

“Last night I was told by the owner of Red Hen in Lexington, VA to leave because I work for [President Trump] and I politely left,” Sanders tweeted. “Her actions say far more about her than about me. I always do my best to treat people, including those I disagree with, respectfully and will continue to do so.”

Yes, Ms. Sanders could have used her personal twitter account, which would not have violated any government ethical codes or laws.