About Half of Americans Say U.S. Moral Values Are 'Poor’

Forty-nine percent of Americans say the state of moral values in the U.S. is "poor" -- the highest percentage in Gallup's trend on this measure since its inception in 2002. Meanwhile, 37% of U.S. adults say moral values are "only fair," and 14% say they are "excellent" or "good." 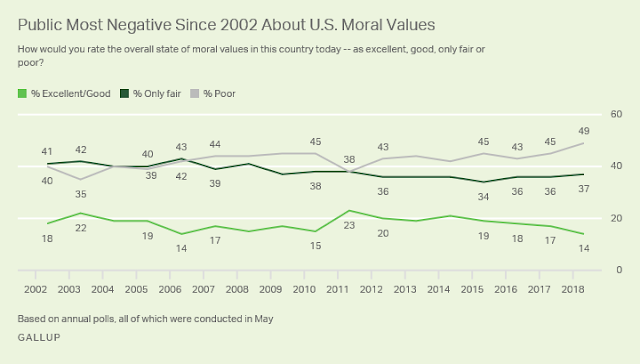 Americans have always viewed the state of U.S. morals more negatively than positively. But the latest figures are the worst to date, with a record-high 49% rating values as poor and a record-tying-low 14% rating them as excellent or good.

In earlier polls on the measure, Americans were about as likely to rate the country's moral standing as only fair as they were to say it was poor. But in 10 of the past 12 annual polls since 2007, Americans have been decidedly more likely to rate it as poor.