Why “happy” doctors die by suicide 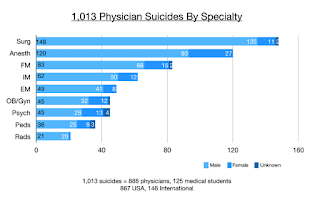 Doctor suicides on the registry were submitted to me during a six-year period (2012-2018) by families, friends, and colleagues who knew the deceased. After speaking to thousands of suicidal physicians since 2012 on my informal doctor suicide hotline and analyzing registry data, I discovered surprising themes—many unique to physicians.

Public perception maintains that doctors are successful, intelligent, wealthy, and immune from the problems of the masses. To patients, it is inconceivable that doctors would have the highest suicide rate of any profession (5).

Even more baffling, “happy” doctors are dying by suicide. Many doctors who kill themselves appear to be the most optimistic, upbeat, and confident people. Just back from Disneyland, just bought tickets for a family cruise, just gave a thumbs up to the team after a successful surgery—and hours later they shoot themselves in the head.

Doctors are masters of disguise and compartmentalization.

Turns out some of the happiest people—especially those who spend their days making other people happy—may be masking their own despair.