Nike, Kaepernick and the morality of capitalism 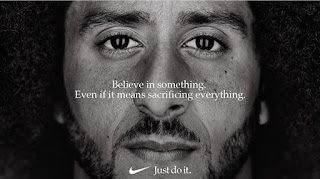 The Republican Party has a large complement of corporate titans in its camp. But conservatives are reminded every day that some of the most successful and innovative companies are led and staffed by people whose worldview is deeply at odds with conservative ideology.

There is Amazon, whose founder and CEO, Jeff Bezos, owns The Washington Post, a frequent target of Trump’s animosity. There is Apple, where CEO Tim Cook has been a vocal critic of racial injustice and anti-gay discrimination. Facebook executive Sheryl Sandberg has written, “A truly equal world would be one where women ran half our countries and companies and men ran half our homes.”

But at the moment, the most visible face of corporate liberalism is Nike, whose new ad campaign features Kaepernick, a former San Francisco 49ers quarterback known for kneeling during the pregame national anthem to protest police abuses and racism. The campaign decision provoked a tweet from the president, who asserted, “Nike is getting absolutely killed with anger and boycotts.”