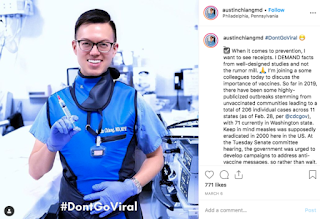 The antidote to fake health news? According to Austin Chiang, the first chief medical social media officer at a top hospital, it’s to drown out untrustworthy content with tweets, pics and posts from medical experts that the average American can relate to.

Chiang is a Harvard-trained gastroenterologist with a side passion for social media. On Instagram, where he refers to himself as a “GI Doctor,” he has 20,000 followers, making him one of the most influential docs aside from TV personalities, plastic surgeons and New York’s so-called “most eligible bachelor,” Dr. Mike.

Every few days, he’ll share a selfie or a photo of himself in scrubs along with captions about the latest research or insights from conferences he attends, or advice to patients trying to sort our real information from rumors. He’s also active on Twitter, Microsoft’s LinkedIn and Facebook (which owns Instagram).

But Chiang recognizes that his following pales in comparison to accounts like “Medical Medium,” where two million people tune in to the musings of a psychic, who raves about vegetables that will cure diseases ranging from depression to diabetes. (Gwyneth Paltrow’s Goop has written about the account’s creator glowingly.) Or on Pinterest and Facebook, where anti-vaccination content has been far more prominent than legitimate public health information. Meanwhile, on e-commerce sites like Amazon and eBay, vendors have hawked unproven and dangerous health “cures, ” including an industrial-strength bleach that is billed as eliminating autism in children.