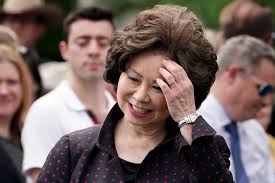 After ethics questions were referred to officials in the State and Treasury Departments, and media outlets like Times began to look into Chao's unusual travel requests, the trip was cancelled.

Chao's family runs an American shipping company, the Foremost Group, which is connected to China's political and economic ruling class, since it conducts most of its business there. As a result, allowing family members to participate in sensitive meetings — especially considering that Chao's actions as transportation secretary could directly impact America's shipping industry, and goes to the heart of the U.S.-China trade policies being handled by the Trump administration — poses a major conflict of interest.