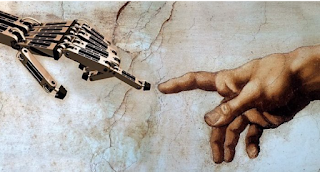 What I see here is moral awakening scrambling for sociopolitical traction: Employees are standing for something larger than sheer personal interests, in the process pushing the Big Tech brass to think beyond their need for an endless flow of capital, consequences be damned.

This is happening across the country. A movement is percolating: Tech won’t build it!

“Across the technology industry,” the New York Times reported in October, “rank-and-file employees are demanding greater insight into how their companies are deploying the technology that they built. At Google, Amazon, Microsoft and Salesforce, as well as at tech start-ups, engineers and technologists are increasingly asking whether the products they are working on are being used for surveillance in places like China or for military projects in the United States or elsewhere.

“That’s a change from the past, when Silicon Valley workers typically developed products with little questioning about the social costs.”

What if moral thinking — not in books and philosophical tracts, but in the real world, both corporate and political — were as large and complex as technical thinking? It could no longer hide behind the cliché of the just war (and surely the next one we’re preparing for will be just), but would have to evaluate war itself — all wars, including the ones of the past 70 years or so, in the fullness of their costs and consequences — as well as look ahead to the kind of future we could create, depending on what decisions we make today.

Complex moral thinking doesn’t ignore the need to survive, financially and otherwise, in the present moment, but it stays calm in the face of that need and sees survival as a collective, not a competitive, enterprise.