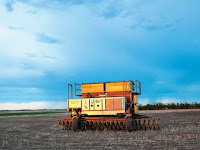 The first fully autonomous ground vehicles hitting the market aren’t cars or delivery trucks—they’re ­robo­-farmhands. The Dot Power Platform is a prime example of an explosion in advanced agricultural technology, which Goldman Sachs predicts will raise crop yields 70 percent by 2050. But Dot isn’t just a tractor that can drive without a human for backup. It’s the Transformer of ag-bots, capable of performing 100-plus jobs, from hay baler and seeder to rock picker and manure spreader, via an ­arsenal of tool modules. And though the hulking machine can carry 40,000 pounds, it navigates fields with balletic precision.