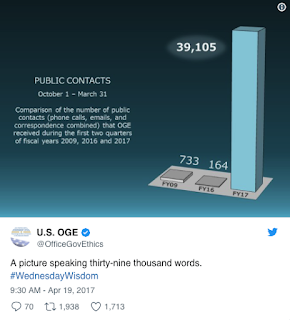 The groups pursuing Trump say they are trying to keep close tabs on a president who is bucking ethical norms by retaining ownership of his businesses and abruptly firing FBI Director James Comey, who was leading the agency’s probe into the Russian government involvement in last year’s election.

“We are in a crisis of ethics,” said Noah Bookbinder, the executive director of Citizens for Responsibility and Ethics in Washington or CREW. “There are ethics a
nd conflicts and influence problems in this administration unlike any we have ever seen. And it began with the president’s decision not to divest from his businesses.”

White House officials this week contended that Trump is operating ethically. As an example, they point to his signing of a far-reaching ethics policy that, among other things, tries to slow the revolving door between government and industry by imposing a five-year cooling-off period before former government appointees can work as lobbyists.

“An organized onslaught from partisan groups committed to undermining the President’s agenda can’t change the fact that he has elevated ethics within this administration,” White House spokesman Raj Shah said in a statement.