The Psychology of Moral Conviction 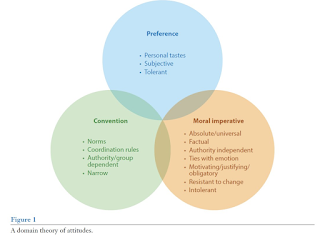 Annual Review of Psychology
(2021). 72:1.
Abstract
This review covers theory and research on the psychological characteristics and consequences of attitudes that are experienced as moral convictions, that is, attitudes that people perceive as grounded in a fundamental distinction between right and wrong. Morally convicted attitudes represent something psychologically distinct from other constructs (e.g., strong but nonmoral attitudes or religious beliefs), are perceived as universally and objectively true, and are comparatively immune to authority or peer influence. Variance in moral conviction also predicts important social and political consequences. Stronger moral conviction about a given attitude object, for example, is associated with greater intolerance of attitude dissimilarity, resistance to procedural solutions for conflict about that issue, and increased political engagement and volunteerism in that attitude domain. Finally, we review recent research that explores the processes that lead to attitude moralization; we integrate these efforts and conclude with a new domain theory of attitude moralization.
From the Conclusion
As this review has revealed, attitudes held with moral conviction have a psychological profile that corresponds well with the domain theory of attitudes. Moral convictions differ from otherwise strong but non-moral attitudes by being perceived as more objectively and universally true, authority independent, and obligatory. In addition to these distinctions, moral convictions predicts the degree to which people perceive that the ends justify the means in achieving morally preferred outcomes, their unwillingness to compromise on morally convicted issues, and increased political engagement and willingness to engage in volunteerism on the one hand, and acceptance of lying, violence, and cheating to achieve preferred ends on the other.
A pdf is here.