The 'debate of the century': what happened when Jordan Peterson debated Slavoj Žižek 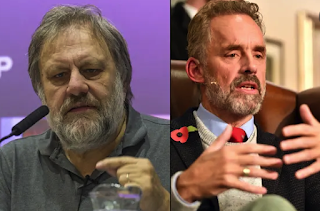 The great surprise of this debate turned out to be how much in common the old-school Marxist and the Canadian identity politics refusenik had.

One hated communism. The other hated communism but thought that capitalism possessed inherent contradictions. The first one agreed that capitalism possessed inherent contradictions. And that was basically it. They both wanted the same thing: capitalism with regulation, which is what every sane person wants. The Peterson-Žižek encounter was the ultra-rare case of a debate in 2019 that was perhaps too civil.

They needed enemies, needed combat, because in their solitudes, they had so little to offer. Peterson is neither a racist nor a misogynist. He is a conservative. He seemed, in person, quite gentle. But when you’ve said that, you’ve said everything. Somehow hectoring mobs have managed to turn him into an icon of all they are not. Remove him from his enemies and he is a very poor example of a very old thing – the type of writer whom, from Samuel Smiles’ Self-Help to Eckhart Tolle’s The Power of Now, have promised simple answers to complex problems. Rules for Life, as if there were such things.