What swamp? Lobbyists get ethics waivers to work for Trump 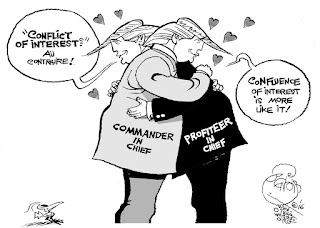 President Donald Trump and his appointees have stocked federal agencies with ex-lobbyists and corporate lawyers who now help regulate the very industries from which they previously collected paychecks, despite promising as a candidate to drain the swamp in Washington.

A week after his January 2017 inauguration, Trump signed an executive order that bars former lobbyists, lawyers and others from participating in any matter they lobbied or otherwise worked on for private clients within two years before going to work for the government.

Though the waivers were typically signed by McGahn months ago, the Office of Government Ethics disclosed several more on Wednesday.

One allows FBI Director Chris Wray "to participate in matters involving a confidential former client." The three-sentence waiver gives no indication about what Wray's conflict of interest might be or how it may violate Trump's ethics order.

Asked about the waivers, Lindsay Walters, a White House spokeswoman, said, "In the interests of full transparency and good governance, the posted waivers set forth the policy reasons for granting an exception to the pledge."