Cassandra’s Regret: The Psychology of Not Wanting to Know

Ignorance is generally pictured as an unwanted state of mind, and the act of willful ignorance may raise eyebrows. Yet people do not always want to know, demonstrating a lack of curiosity at odds with theories postulating a general need for certainty, ambiguity aversion, or the Bayesian principle of total evidence. We propose a regret theory of deliberate ignorance that covers both negative feelings that may arise from foreknowledge of negative events, such as death and divorce, and positive feelings of surprise and suspense that may arise from foreknowledge of positive events, such as knowing the sex of an unborn child. We conduct the first representative nationwide studies to estimate the prevalence and predictability of deliberate ignorance for a sample of 10 events. Its prevalence is high: Between 85% and 90% of people would not want to know about upcoming negative events, and 40% to 70% prefer to remain ignorant of positive events. Only 1% of participants consistently wanted to know. We also deduce and test several predictions from the regret theory: Individuals who prefer to remain ignorant are more risk averse and more frequently buy life and legal insurance. The theory also implies the time-to-event hypothesis, which states that for the regret-prone, deliberate ignorance is more likely the nearer the event approaches. We cross-validate these findings using 2 representative national quota samples in 2 European countries. In sum, we show that deliberate ignorance exists, is related to risk aversion, and can be explained as avoiding anticipatory regret. 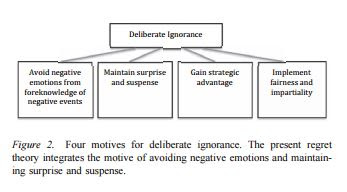