Why do inequality and deprivation produce high crime and low trust? 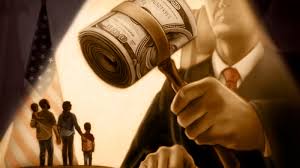 De Courson, B., Nettle, D.
Sci Rep 11, 1937 (2021).
https://doi.org/10.1038/s41598-020-80897-8
Abstract
Humans sometimes cooperate to mutual advantage, and sometimes exploit one another. In industrialised societies, the prevalence of exploitation, in the form of crime, is related to the distribution of economic resources: more unequal societies tend to have higher crime, as well as lower social trust. We created a model of cooperation and exploitation to explore why this should be. Distinctively, our model features a desperation threshold, a level of resources below which it is extremely damaging to fall. Agents do not belong to fixed types, but condition their behaviour on their current resource level and the behaviour in the population around them. We show that the optimal action for individuals who are close to the desperation threshold is to exploit others. This remains true even in the presence of severe and probable punishment for exploitation, since successful exploitation is the quickest route out of desperation, whereas being punished does not make already desperate states much worse. Simulated populations with a sufficiently unequal distribution of resources rapidly evolve an equilibrium of low trust and zero cooperation: desperate individuals try to exploit, and non-desperate individuals avoid interaction altogether. Making the distribution of resources more equal or increasing social mobility is generally effective in producing a high cooperation, high trust equilibrium; increasing punishment severity is not.
From the Discussion
Within criminology, our prediction of risky exploitative behaviour when in danger of falling below a threshold of desperation is reminiscent of Merton’s strain theory of deviance. Under this theory, deviance results when individuals have a goal (remaining constantly above the threshold of participation in society), but the available legitimate means are insufficient to get them there (neither foraging alone nor cooperation has a large enough one-time payoff). They thus turn to risky alternatives, despite the drawbacks of these (see also Ref.32 for similar arguments). This explanation is not reducible to desperation making individuals discount the future more steeply, which is often invoked as an explanation for criminality. Agents in our model do not face choices between smaller-sooner and larger-later rewards; the payoff for exploitation is immediate, whether successful or unsuccessful. Also note the philosophical differences between our approach and ‘self-control’ styles of explanation. Those approaches see offending as deficient decision-making: it would be in people’s interests not to offend, but some can’t manage it (see Ref.35 for a critical review). Like economic and behavioural-ecological theories of crime more generally, ours assumes instead that there are certain situations or states where offending is the best of a bad set of available options.
The research is here.