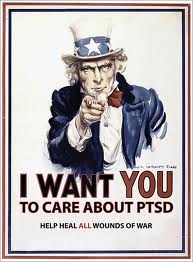 It has gone by many names: battle fatigue, shell shock, soldier's heart. Most recently it has been called post-traumatic stress disorder.

But as the number of identified cases of post-traumatic stress has skyrocketed among soldiers, returned veterans and first-responders -- police officers, firefighters, paramedics, etc. -- it may soon undergo another name change.

In its revised handbook, "Diagnostic and Statistical Manual of Mental Disorders," the American Psychiatric Association may reclassify post-traumatic stress as an "injury," rather than a "disorder."

The idea of a name change was initially promoted by the Army, particularly Gen. Peter Chiarelli, who until his retirement in February led the military's effort to reduce a record-high suicide rate among the troops.

"No 19-year-old kid wants to be told he's got a disorder," Chiarelli told APA members and news reporters. An "injury" may be perceived as more treatable and combat-related. The hope is that active-duty soldiers experiencing PTS will reach out for help and their superiors will be more supportive.

The entire story is here.

Thanks to Ken Pope for this story.